From the Archives: Our Founding

Below is the story of how POBS began, as told by cofounder Nancy Goldenberg, who wrote this for the Fall 1993 issue of Challenge, the newsletter of the Hurricane Island Outward Bound School.

He was telling me what a wonderful experience he recently had with his son on an Outward Bound course.

At the time of this conversation in 1987, I was a Big Sister to an urban teen from North Philadelphia. I had just taken Tammy on her first hike in my beloved Wissahickon, a portion of Philadelphia’s 8,700 acre Fairmount Park system that has inspired me spiritually and physically ever since moving to the area 11 years ago.

I noticed the excitement in Tammy’s face as she climbed the trail, discovering nature’s secrets for the first time. In this wooded oasis only minutes from the noisy street corners of Tammy’ s neighborhood, I thought perhaps she too could find solace from familial grief, experience physical challenges beyond those provided by a blacktopped playground, and uncover the courage to chase after her every hope and desire.

After listening to my friend’s father/son Outward Bound saga, I responded, “Gee, wouldn’t it be great to provide such a great experience to kids like Tammy, and do it right in Philadelphia?”

“You know,” said my friend, “I think Outward Bound already has an urban program for kids like Tammy. You should contact their headquarters for more information.”

“My work on behalf of Outward Bound is really no work at all…it is truly a labor of love.” – POBS Founder Nancy Goldenberg

I began to tell my most trustworthy friends about my concept, knowing they would surely let me know if l was being too idealistic. Everyone encouraged my continuous pursuit.

Unfortunately my timing was off. I had introduced myself and my idea to Tim Greenwood, Philadelphia’s HIOBS trustee at the time. Tim gently broke the bad news.

“Great idea, but it’s just not possible now.” He hadn’t heard the last from me yet. I stored my files. Something inside told me not to throw them away just yet.

A year passed and one trustworthy friend, Michael Nutter, had just been elected to Philadelphia City Council. His councilman district included my beloved Wissahickon, as well as other parts of the park system where he played as a youth.

Prepared to put park and education related issues on his agenda as priorities, Michael asked, “Whatever happened to that great idea you had about creating an Outward Bound program in Fairmount Park?”

“Nothing,” I replied. “The time just wasn’t right”

I gulped, thought for a moment and said, “I will resurrect the idea if you agree to help me.”

It was a deal. The next day I called Tim Greenwood. “This is Nancy Goldenberg. Remember me?”

Indeed he did. And this time he had good news. The time was ripe to coordinate Philadelphia’s activities with Baltimore’s urban youth model.

During the summer of 1992, Tim, Michael, Philadelphia’s newest HIOBS trustee Ed Stainton and I met, creating lists and calling Philadelphians whom we felt would support our effort. By November we had established an Executive Committee, called ourselves the Philadelphia Friends of Outward Bound, devised a mission statement, and the rest, as they say, is history.

Perhaps it’s persistence. Maybe it’s the stubborn streak I inherited from my father or the innate need to filter my feeling of good fortune to the Tammys of the world. Whatever the motivating force, my work on behalf of Outward Bound is really no work at all. It’s an effort harbored deeply in my heart It is truly a labor of love. 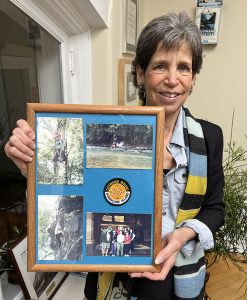 Philadelphia Outward Bound was created to effect positive change in the lives of our city’s youth through a fusion of experiential education, discovery, reflection, service, and performance.  The goal was simple: provide our youth with the skills needed to develop a better understanding of their own capabilities and their importance to the community around them.  Little did I realize how much POBS would change my life as well.  POBS is now my legacy.  Starting this organization is the single most important thing I’ve ever done in my life.

Dr. Danielle Merritt is vice principal of the Pennypacker School. She is also an Outward Bound alum who participated in our very first expedition! Check out her story in this short video. ... See MoreSee Less