“If I’d been afraid,” she said, “I never would have started out in the first place.”

Who was Grandma Gatewood?

Emma Gatewood was the first woman to solo thru-hike the entire Appalachian Trail. The Appalachian Trail, which runs from Maine to Georgia, covers nearly 2,200 miles and takes months for most to finish.  She completed it for the first time in 1955 at age 67, and then two more times after that. Her trail name, “Grandma Gatewood” not only spotlighted her age (she was a great-grandmother), but also the fact that she was a woman. At the time, hiking, and certainly thru-hiking, had been considered “a man’s sport.” 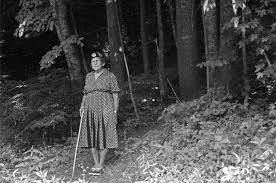 Emma was born in Ohio into a family of 15 children in 1887. At 19, she married a man named PC Gatewood, who was a primary school teacher. They had 11 children together throughout their 30 years of marriage. Tragically, it was not a happy marriage. Emma was brutally beaten on a regular basis, and survived through broken ribs, teeth, and on several occasions was beaten to an inch of her life. When her husband got violent, she would often retreat to the woods surrounding their town to find some peace and solitude. She would have to run at a moments notice without bringing many supplies if any with her. She would sometimes stay overnight, having to figure out how to survive in this environment.

“The forest is a quiet place and nature is beautiful. I don’t want to sit and rock. I want to do something.”

Eventually, Emma Gatewood left her husband and began to reclaim her life.

The Path of Resilience

Emma’s first attempt at hiking the AT was a disaster. She got very lost for days, ran out of food, broke her glasses, and was bitten by black flies. During her rescue, the squad of first responders (who were all men) said to her, “this is no place for you. Go home, grandma.” So, she did. However, after some reflection, she resolved to try again and learn from her mistakes. And she did indeed succeed. 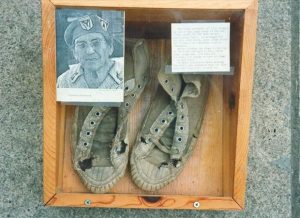 This grew into a passion for long expeditions. In addition to completing the AT three times, she also hiked the entirety of the Oregon Trail- a 2,000 mile trail from Missouri to Oregon. She averaged 22 miles a day. When she wasn’t thru-hiking, she dedicated her life to protecting national forests and maintaining trails so that others could enjoy them as well. In fact, she was one of the founders of the Buckeye Trail – A BEAUTIFUL, nearly 1,444 mile trail that winds around the entire state of Ohio.

Not only did Emma leave her legacy behind in the form of the Buckeye Trail, she had a major influence on thru-hiking culture. She also paved the way for many other women interested in long-distance hiking. For example, she helped make the concept of backpacking more approachable by forgoing heavy and expensive equipment that is commonly seen on trail. Instead, she carried a hand-sewed denim knapsack and a shower curtain, which acted as her shelter and rain gear, some food, and her “town dress;” which she wore whenever she was passing through a town “so people wouldn’t think she was a tramp” [Ben Montgomery, author of “Grandma Gatewood’s Walk”]. Grandma Gatewood is also famous for her hiking shoes of choice: Converse. 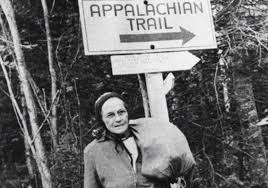 What she didn’t have with her was a tent, a sleeping bag (she used to heat up rocks on a fire and sleep on them on cold nights), a fire starter (she used friction, which is extremely hard to do), and a map (she used her intuition to find her way). She also greatly relied on the generosity of other people she met on her journey to help her out in times of need (food, directions, shelter). In this way, she was the initial influencer of the “Ultra-light”/minimalist backpacking movement that exists today.

Grandma Gatewood is only one of many role models and historical figures that have graced the AT;  every year, hundreds  take on the challenge in hopes of breaking records and inspiring others. The trail carries imprints of so many incredible individuals, and POBS is grateful to share that experience with expedition participants.

Written by Lottie Appel and Laura Gates, sourced from: https://www.washingtonpost.com/blogs/she-the-people/wp/2015/01/05/grandma-gatewood-survived-domestic-violence-to-walk-the-appalachian-trail-alone-at-67/ and https://www.youtube.com/watch?v=65rX0lOMF5w and POEM BY EMMA GATEWOOD

We had a great time with Natural Creativity Center today! They worked with our OB Professional staff on goals around cooperation, compassion and creativity.

If you’d like to take your team to the next level, check out what OBPro can do for your org at pobs.org/OBpro.

Thanks POBS for all the great work you do! OBPro is an excellent program